Published May, 2014 by Anton Helman

Hypotension is not defined by the physician, but by the patient. There is no specific number if the perfusion is low – if there is cardiac or renal dysfunction or a high lactate, or other signs perfusion is inadequate, the pressure is too low even if it seems “normal”.

Keep it simple: Initial management of the first 3 hours is simple (measure lactate, get cultures, start antibiotics, and fluids!)

Which Antibiotics? Give antibiotics ASAP, as soon as sepsis is recognized. Mortality increases each hour antibiotics are not given. Give >1 active agent, and give them quickly, not needing to wait for 1 to finish before the next one.

Norepinephrine vs Dopamine? Lots of evidence that mortality is higher in severe septic patients treated with dopamine versus norepinephrine (NEJM 2010 De backer), so max out on norepinephrine (5 to 20 ug/min) before adding a second agent.

Consider what you might be missing before adding a second pressor:

a) give more fluids

b) correct calcium if low

c) give blood if bleeding

f) epinephrine for allergy (and glucagon if anaphylaxis on B-blocker)

Who should get steroids? Corticosteroids are now less emphasized, but may have a role in hypotension refractory to shock. Start IV hydrocortisone 200mg/day.

HIMAP: (Weingart et al 2006). Helps classify the type of shock and find the cause, whether hypoveolemic, cardiogenic, obstructive, or distributive).

While thrombolysis for massive PE has become standard of care, it’s still not so clear whether lytics are indicated for submassive PE. Definition of Submassive Pulmonary Embolism

There have been 3 key trials looking at thrombolysis for submassive PE:

Putting it all together in One Suggested Approach to consider: For patients under the age of 75, with absolutely NO contraindications to thrombolysis, with a fresh acute PE of just a few hours, that’s anatomically extensive on the CT, AND who

The goal of using naloxone is to restore normal ventilation, not to restore mental status or completely reverse opioids. Start with a dose of 0.01mg/kg in opiate patients, or 0.005mg/kg in patients with an unknown opiate history, titrating stepwise to respiratory rate. Patients in a coma often do not respond to

Toxic ingestion dose is 150mg/kg.Time of ingestion is often unclear. Acetominophen overdose patients can present with altered LOC, when they are in severe overdose, and management is not just about NAC for these patients. Start with NAC – but call the poison centre, as it might not be enough in a massive overdose (>350-400mg/kg), and consider the following other adjunctive options:

1) Fomepizole – acetaminophen gets metabolized to NAPQI, increasingly in overdose, along the p450 system. CYP2E1 is actually inhibited by fomepizole, the production of NAPQI is theoretically halted by inhibiting the enzyme. (Study in rats only – decreased liver enzymes. Brennan Ann Emerg Med 94). Only give one dose, because repeat doses will turn up the enzyme.

2) Dialysis? Acetominophen is a water soluble, and not protein bound in large doses. If the patient has a massive ingestion, NAC may not be enough, so consult nephrology early. 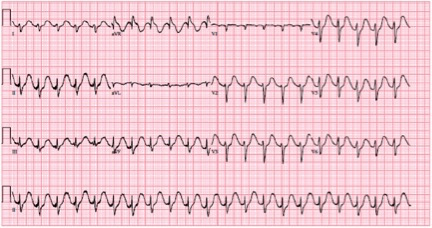 When the patient subsequently seizes, the management begins of a presumed TCA overdose.

Fluids and vasopressors – for hypotension

Intralipid has been shown to be an effective antidote to local anesthetic overdose in humans. Animal studies and case reviews of intralipid for lipophilic drugs overdoses. I.e. wellbutrin (Siriani paper) and lamotrigine are promising.

Drugs to consider Intralipid therapy in consultation with your poison control centre: TCAs, some BBlockers (propanolol), CCBs (verapamil), haloperidol, buproprion. How to do – Bolus 100mL, then hang the rest of the 500mL bag.

Do NOT administer intralipid before you would give all the other antidotes appropriate for the overdose.  First address the ABCs, give supportive care, specific antidoes, and then intralipid as an adjunct. Remember that intralipid can interfere with other medications (i.e. can bind benzodiazepines you are giving for seizures).

Crushing and injecting Buproprion is associated with a crack or cocaine-like high. Beware of unexplained requests for Wellbutrin prescriptions – look for these skin findings: 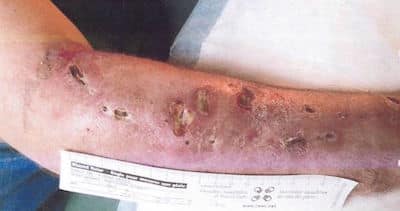 Any patient who presents with a suspected overdose with a resp rate >35 – think ASA until proven otherwise (just like low RR – think opioids).

Pitfalls: Always order serial q2h hour ASA levels as they may rise due to tablet concretions in the gut. Always add potassium when alkalinizing the urine. Remember to hyperventilate intubated patients. Get nephrology involved early, as delay in dialysis is the most common cause of premature death in an ASA overdose.

Joel Yaphe – What Your Colleagues are Reading: Articles From 2013

Objective: To compare topical tranexamic acid with anterior nasal packing in the treatment of anterior epistaxis

The Study: Randomized trial of 216 patients (out of 316 assessed for eligibility)

Inclusion: Patients randomly selected from those presenting with epistaxis to a single ED in Iran

Intervention Group: 15cm cotton pledget soaked in 500mg of the IV injectable form of tranexamic acid and lef in place until bleeding stopped. Rescue anterior pakcing was used if needed.

Take home: Topical TXA is easy, and effective for control of anterior epistaxis

Cost: based on prices at one large Canadian urban hospital

If you do not have access to the injectable form of tranexamic acid, alternatively you can take a single 500mg pill of Cyclokapron (TXA) and dissolve it in 10-15ml of water to make a slurry to apply to the nasal mucosa

Background: Therapeutic Hypothermia targeting temperate of of 32-34 degrees is recommended in resuscitation guidelines, but questions remain as to the importance of hypothermia itself as opposed to pervention of hyperthermia in post cardiac arrest patients.

For 28hr followed by gradual rewarming at 0.5 degrees/hr

Questions & Issues: Outcomes in both groups were significantly better than those a decade ago. Are there some patients who may benefit from more intensive cooling? Are there harms of intensive cooling? As the authors noted, “none of the point estimates were in the direction of benefit” for the 33 degrees group.

Concussions and their Consequences

This review article is a handy aid for the practicing EM doc. As Dr. Tator writes, “it is now standard practice for every concussed person to be removed from active participation and to be evaluated by a medical doctor“. (This usually means you…….)

Protocol for Graduated return to play:

Derived Decision Rule – investigate if any of:

Take Home: Not ready for prime time The authors note that implementation studies are required before the rule is employed in clinical care May be useful as teaching tool to learn some of the important features of SAH clinical assessment

Question 1: How reliable is the BP in determining tissue perfusion in sepsis? What other factors should you be considered to make the diagnosis of sepsis requiring resuscitation?

Answer: Hypotension is not defined by the physician, but by the patient. There is no specific BP number if the perfusion is low – assess urine output/renal function, cardiac function by POCUS, ECG & Troponin and lactate elevation to assess for poor organ perfusion.

Question 2: If norepinephrine does not achieve the goal of improving organ perfusion in septic shock, what factors should you consider correcting before adding second pressor?

Answer: Assess IVC by POCUS to determine if more fluids are required,  correct calcium if low, give blood if bleeding, consider intralipid for toxin shock, check thyroid, consider ‘stress dose’ of hydrocortisone, epinephrine for anaphylaxis (and glucagon if anaphylaxis on B-blocker, consider t-PA for possible PE as a cause of persistent shock.

Question 3: What factors should be taken into account when deciding whether or not to give thrombolytics for submassive pulmonary embolism?

Answer: Factors that make thrombolysis for submassive pulmonary embolism more likely to be effective are: age <75, extensive PE on CT and shorter duration of symptoms.

Question 4: What 2 treatments should be considered other than NAC in massive acetominophen overdose?

Answer: Fomepizole (single dose) & Dialysis should be considered in massive acetaminophen overdose in consultation with your poison control centre and nephrologist.

Question 5: When should intralipid therapy be considered in the course of managing the poisoned patients?

Answer: For patients who have massive overdoses of  TCAs, some BBlockers (propanolol), CCBs (verapamil), haloperidol and buproprion, consider lipid emulsion therapy after standard antidotes and resuscitative efforts have failed.

Question 6: Why is it so important to measure serial ASA levels in a suspected ASA overdose patient?

Answer: Always order serial q2h hour ASA levels as they may rise to toxic levels due to tablet concretions in the gut. A common pitfall is relying on one ASA level to guide therapy, and underestimating the need for dialysis.

Question 7: What is the overall estimated mortality rate for the hyperthermic overdose patient?

Answer: The overall estimated mortality rate for the hyperthermic overdose patient is as high as 75%! So start aggressive cooling immediately in these patients.

Answer: The 2 take home points from the TTM trial are 1. Avoid hyperthermia, as we know from previous studies that fever is associated with poor outcomes 2. We still should actively cool to at least 36 degrees.

Answer: Investigate if any of – Age >40, neck pain or stiffness, witness LOC, onset during exertion, thunderclap headache, limited flexion on exam. Even though the sensitivity of this decision instrument is 100%, the specificity is very poor (only 15.3%), and using the decision rule would have increased the rate of LP compared to physician gestalt. In addition implementation studies have not been done as of yet.

Dr. Helman, Dr. Carr. Dr. Yaphe and Dr. Thurgur have no conflicts of interest to declare.