Dr. Andrew Worster and the BEEM (Best Evidence in Emergency  Medicine) group from McMaster University has teamed up with EM Cases, Justin Morgenstern (@First10EM) and Rory Spiegel (@EMNerd_) to bring you a blog that blends the BEEM critical appraisals in a case-based, interactive, practice-changing format. In each post we choose the most important literature on a given topic and run through a case, learning how to apply evidence based medicine to our practice. Welcome to BEEM Cases!

With seconds left in the game, Melissa, an 11 year old girl, drives hard to the basket for a layup. She gets knocked to the ground, and doesn’t see the winning shot pass through the net, because it appeared as though she briefly lost consciousness. She quickly gets back up and celebrates with her friends, but after the celebrations, her parents bring her to your community emergency department to get checked. You confirm that she did indeed briefly lose consciousness. She complains of a mild ongoing headache as well as nausea. Her neurologic exam is normal and she has no signs of skull fracture.

You don’t need stats to know that pediatric minor head injury is common. Kids love to run around knock their heads into things. Luckily, serious traumatic brain injury is relatively rare. Most children we see in the ED after minor head injuries are awake, acting normally, and have a very low risk of an intracranial bleed. Our main job is balancing the small risk of serious brain injury with the potential harms of CT scanning.

Is there benefit to recommending strict rest after a child has a concussion?

This is a well-designed study trying to answer an important question in pediatric emergency care. The primary outcome is relevant to patients. The execution of the study design was well done. There was overall good follow-up of patients (90%) and the researchers were careful to try to catch all patients with clinically important injury.

There were some limitations of the study design. Firstly, the sample size for clinical decision rule studies is typically based on the number of outcomes needed and this was not the case for this study, hence the number of patients with significant injury was only 21. This limited number results in the wider confidence intervals seen around point estimates. Secondly, the inter-rater reliability during data collection was only moderate.

The Bottom line for the best CDR

Based on this study, it appears that both clinician gestalt and the PECARN Rule have adequate sensitivity to rule out important injuries at the bedside, with the PECARN rule being slightly more specific than gestalt. Clinicians should be aware that this conclusion is somewhat limited by the wide confidence intervals in is study, and that clinical expertise and shared decision making remain important components of safe discharge of these patients.

Link to The PECARN rule on MDcalc

You review the PECARN criteria with Melissa and her parents. The clinical decision tool indicates that she has less than a 0.05% chance of clinically important traumatic brain injury. You suggest forgoing the CT, but Melissa’s parents seem concerned. “Melissa passed out! I googled it, and it says right here that if you pass out you could die, and you really need to get a scan of your head to be safe.“

The number of patients in this study is impressive and the value of this is seen in the narrow confidence intervals around the summary estimates. It is unlikely that a primary cohort study of this magnitude will ever be conducted to specifically answer this question, and so this might continue to be the best evidence that emergency physicians ever have.

This is a secondary analysis of the data from the Kuppermann (2009) study that established the PECARN head-injury rule for children. The methodology of the original study, and therefore this study, is robust. Follow-up, although not specified in this paper, is described in the original paper and included ensuring that patients who were sent home were followed up by phone. Those not reached by phone were searched for to ensure they did not re-present to a healthcare facility or the morgue.

The results of this study indicate that the child with a head injury who has isolated LOC and no other concerning history, signs or symptoms of injury is at extremely low risk of clinically-important injury and can safely be sent home in the charge of reliable caregivers with appropriate instructions. Periods of observation in the ED are valuable and appropriate in place of head CT if there are concerns.

You explain to the parents that there is a very low chance of significant traumatic brain injury. After a shared decision making conversation, you decide to opt for a brief period of observation instead of a CT scan. After a period of observation, Melissa’s neurologic exam is repeated and is normal. She is feeling better, although she does have a mild ongoing headache, noise sensitivity, and some mild nausea. You are ready to discharge the patient when your medical student turns to you and says, “Couldn’t this be a concussion? Shouldn’t she be put on strict bed rest for a few days?”

Is there benefit to recommending strict rest after a child has a concussion?

Both groups (n=50 and 49) reported an approximate 20% decrease in physical activity and energy expenditure for the five days post-injury. There was more reported high and moderate mental activity on days two to five in the usual care group (8.33 vs. 4.86 hours, P=0.03).

This is a novel, single-center study examining a topic that we often struggle with in the ED: How long to keep someone resting post-concussion. The patients were aged 11 to 22 years, and so it is questionable whether this study can be generalized to younger pediatric patients. The two groups did differ significantly in terms of age with the strict rest group being older. The impact of this difference is unknown. Blinding of the subjects was not possible. The outcome measures such as re-presentation to ED and proportion of patients with symptoms beyond 10 days were not described; 11% of patients were lost to follow-up.

This study has opened the door to a very interesting line of inquiry, and further research will be very useful. For the time being, however, there is evidence to support a two-day rest period following a concussion with a gradual return to activity. Keeping a child at strict rest for five days post-concussion appears to offer no benefit, and there is evidence of harm from this strategy.

Melissa is sent home with a graduated return to play plan and return precautions. She returns to the department a week later, but this time because her brother has a buckle fracture of his distal radius. Melissa is pleased to tell you she is feeling great and was named team MVP after her game winning bucket.

Dr. Helman & Dr. Morgenstern have no conflicts of interest to declare

About the Author: Justin Morgenstern

Justin Morgenstern is an emergency physician and the director of simulation education at Markham Stouffville Hospital. He has a special interest in medical education, mental practice in emergency medicine, and science-based medicine. He is the founder of the #FOAMed blog First10EM and an Associate Editor at EM Cases. He is a writer of the BEEM Cases blog and interviews researchers on the Journal Jam podcast. 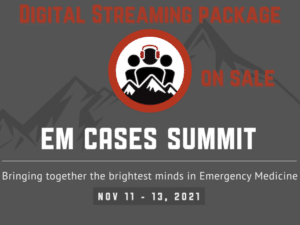