This EM Cases episode is on the diagnosis and management of Bronchiolitis. Bronchiolitis is one of the most common diagnoses we make in both general and pediatric EDs, and like many pediatric illnesses, there’s a wide spectrum of severity of illness as well as a huge variation in practice in treating these children. Bronchiolitis rarely requires any work up yet a lot of resources are used unnecessarily. We need to know when to worry about these kids, as most of them will improve with simple interventions and can be discharged home, while a few will require complex care. Sometimes it’s difficult to predict which kids will do well and which kids won’t. Not only is it difficult to predict the course of illness in some of these children but the evidence for different treatment modalities for Bronchiolitis is all over the place, and I for one, find it very confusing. Then there’s the sphincter tightening really sick kid in severe respiratory distress who’s tiring with altered LOC. We need to be confident in managing these kids with severe disease.

So, with the help of Dr. Dennis Scolnik, the clinical fellowship program director at Toronto’s only pediatric emergency department and Dr. Sanjay Mehta, an amazing educator who you might remember from his fantastic work on our Pediatric Ortho episode, we’ll sort through how to assess the child with respiratory illness, how to predict which kids might run into trouble, and what the best evidence-based management of these kids is.

Bronchiolitis is the most common lower respiratory tract infection under 2 years of age and the leading cause of hospital admission under 6 months of age. The incidence of hospitalization for bronchiolitis is increasing annually. There is a wide spectrum of illness severity as well as considerable practice variation in the management of Bronchiolitis across North America.

Differentiating Bronchiolitis from Asthma and Pneumonia

Q: At the bedside, how is bronchiolitis differentiated from pneumonia and asthma (or reactive airways disease)?

While bronchiolitis sometimes presents to the ED in ‘classic’ fashion (a first episode of wheezing in a child less than 2 years of age, after a 2-4 day viral prodrome of fever, cough and nasal congestion, between the months of November and April in Northern climates), it is often not possible to distinguish Bronchiolitis from asthma or pneumonia at first contact in the ED, as their clinical presentations may overlap.

Children with asthma usually presents with recurrent wheezing in a child >2 years old with a personal and/or family history of atopy or a family history of asthma. Environmental or allergic precipitants are often present in older children.

Response to bronchodilators may help to differentiate bronchiolitis from asthma.

Children with bacterial pneumonia often appear ‘toxic’ and tend to have higher grade fevers than those found in bronchiolitis. They may have focal chest findings and usually do not have wheeze.

Assessment of the Dyspneic Child

Q: What are the important aspects of the clinical exam in a patient who presents in respiratory distress in general?

The ABCs of the Pediatric Assessment Triangle: 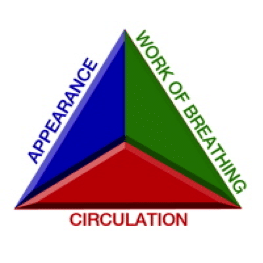 Q: What investigations are necessary to make the diagnosis of Bronchiolitis in the ED?

For a child who presents typically, no investigations are necessary.

The American Association of Pediatricians (AAP) Clinical Practice Guideline for the Management and Diagnosis of Bronchiolitis6 states: “clinicians should diagnose bronchiolitis and assess disease severity on the basis of history and physical examination. Clinicians should not routinely order laboratory and radiologic studies for diagnosis”

The chest x-ray findings of bronchiolitis are often nonspecific, patchy infiltrates and hyperinflation that can often be mis-interpreted as consolidation and lead to inappropriate antibiotic use.

Chest x-rays are often needlessly ordered for kids with wheeze. A prospective cohort study1 sought to determine the clinical predictors of an abnormal chest x-ray in children under 2 years of age with suspected bronchiolitis. They found that less than 5% of these kids had abnormal x-rays as assessed by two blinded experts. The only independent clinical predictor of an abnormal x-ray of the 9 variables studied was the presence of fever.

However, one should consider a chest x-ray when:

The Utility of RSV swabs in Bronchiolitis

Q: What is the utility of ED RSV testing in a child suspected of bronchiolitis?

In an otherwise healthy child who presents typically with Bronchiolitis, RSV testing is likely of no value because bronchiolitis is a clinical diagnosis, and the results of the test will not alter management.

Nonetheless, in certain populations an RSV swab should be considered to confirm the diagnosis of bronchiolitis including infants who are:

All febrile infants 0-28 days of age require a full septic work-up and be started on empiric IV antibiotics, regardless of any suspicion for bronchiolitis.

All febrile infants who display signs of septic shock or impending septic shock should have a full septic work up and be started on empriric IV antibiotics.

The risk of UTI is approximately 5% in febrile infants with bronchiolitis age 1-2 months, therefore our experts recommend obtaining a urinalysis and culture for these children.

For a discussion on pediatric fever, sepsis and septic shock see Episode 48 and Episode 52 with Sarah Reid and Gina Neto.

Bronchiolitis is a self-limited disease, which can be managed at home with supportive care in the majority of cases.

Supportive care in the ED focuses on assisted feeding, nasal suctioning and oxygen therapy. The administration of bronchodilators, nebulized epinephrine, steroids, nebulized hypertonic saline, high flow oxygen and ketamine are controversial. We will look at each of these options separately:

Q: What is the role for nasal suctioning in bronchiolitis?

In our experts’ view, given that infants are obligate nasal breathers until 2 months of age and the upper airway obstruction from mucous can contribute

Q: Is there a role for a trial of inhaled bronchodilators in Bronchiolitis?

While the literature and recent guidelines2,6 report no evidence of benefit for bronchodilators in bronchiolitis, our experts recommend considering a trial of salbutamol for patients in whom there is a strong family history of asthma, atopy, or in the patient who has had multiple wheezing episodes. Approximately 15-25% of infants with bronchiolitis will respond to bronchodilators. If a trial of salbutamol is going to be attempted, the clinician should objectively assess the work of breathing before and after its administration and continue therapy only if a clinical benefit is noted. Our experts recommend that ipratropium be reserved for asthmatic patients and should not be trialed in bronchiolitis.

Q: Is there a role for a trial of nebulized epinephrine?

A Cochrane Review from 20114 found that nebulized epinephrine reduced admission rates on day 1, however there was no difference in hospitalization within 7 days compared to placebo. Clinical severity scores have been shown to be significantly decreased at 60 and 120 mins after administration of nebulized epinephrine compared with placebo, but this effect on not prolonged. Thus, epinephrine may provide short-term benefit only and may only temporarily delay the need for admission. Nebulized epinephrine may be considered in patients in whom you suspect admission will be the likely disposition. If there is going to be a trial of nebulized epinephrine, our experts suggest a similar approach to beta-2 agonists. That is, you must monitor the patient objectively for benefit of treatment to guide further management.

Q: Should we be using oral steroids in the treatment of bronchiolitis?

A Cochrane review from 20132 and a Systematic Review in Annals of Emergency Medicine in October 20147 showed no benefit of oral steroids with respect to length of stay and admission rates for children with Bronchiolitis. As such, steroid medication used in isolation for bronchiolitis is not recommended by our experts.

Q: Is there evidence for steroids in combination with nebulized epinephrine?

A large RCT by Plint et al. in 20095 demonstrated a statistical trend towards decreased admission rates for children treated with a combination of oral steroids and nebulized epinephrine, however our experts believe that the clinical significance of this difference was very small, and therefore do not recommend this treatment routinely. The Canadian Pediatric Society guidelines for Bronchiolitis state that the evidence is equivocal for the combination of steroids and epinephrine.

Q: What role does nebulized hypertonic saline have in bronchiolitis management?

Hypertonic saline is theorized to be of benefit based on its ability to reduce airway edema and mucous plugging. While nebulized hypertonic saline has been found to reduce length of stay and severity scores in hospitalized patients in a Cochrane review in 2013, the benefits of this treatment are short term and have not been consistently found to reduce rates of admissions or improve oxygenation. Our experts view this treatment as a temporizing measure for a patient who is going to be admitted and not as a rescue maneuver. Once again, the CPS guidelines are equivocal with respect to nebulized hypertonic saline in bronchiolitis.

Q: In a patient with bronchiolitis in severe respiratory distress, what treatment modalities should be considered?

Our experts recommend the use of warmed humidified high-flow oxygen by facemask as it provides positive end expiratory pressure (PEEP) and allows the delivery of a high concentration of oxygen. While this modality may not be tolerated by all patients, in those who are showing signs of fatigue and in whom you are considering intubation, there may be a role for high flow oxygen. While ketamine is an option in these patients, it is not recommended by our experts unless it is going to be used in RSI. While it may have benefits in asthmatic patients due to its bronchodilatory properties, bronchoconstriction is not thought to play a significant role in bronchiolitis and thus ketamine is unlikely to be of benefit. In addition, ketamine may increase secretions in high doses, which may further worsen oxygenation in this group of patients.

Q: Given that there is no clear benefit to most treatment modalities for Bronchiolitis, what should be our approach to these patients?

From The Canadian Paediatric Society Guidelines for Bronchiolitis, 2014 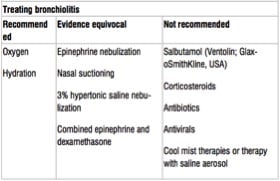 Our experts stress the importance of correcting hypovolemia in these patients and treating hypoxia if the oxygen saturation is less than 90%. In addition, treating fever and serially assessing these patients is important in determining the need for further interventions. A trial of salbutamol is reasonable as 15-25% of patients may respond favorably, and for patients in whom you anticipate admission, a trial of epinephrine and/or hypertonic saline can be considered. For patients showing signs of fatigue or in whom you anticipate intubation, high flow oxygen is recommended.

Update 2015: There is conflicting evidence for the use of CPAP and high-flow nasal cannula for respiratory failure in bronchiolitis. Abstract #1 Abstract #2

Q: What is the Risk of Apnea in Bronchiolitis? Can it be predicted?

The overall incidence of apnea in bronchiolitis is 2.7% but in those under 6 weeks of age, the risk can be as high as 5%. Risk factors that are associated with apnea in patients with Bronchiolitis include:

Q: In addition to apneic episodes, what are the criteria for admission according to the Canadian Pediatric Society 2014 Guidelines3?

Remember that bronchiolitis symptoms peak around days 3-5. If the patient presents on Day 2, you can expect the patient may get worse before they get better. This should be factored into your disposition decision. Also, 50% of patients who develop severe disease do so after their first ED visit, so clear discharge instructions are very important.

For more Pediatric EM learning visit one of EM Cases newest collaborators trekk.ca – Translating Emergency Knowledge for Kids (TREKK) is a growing network of researchers, clinicians, health consumers and national organizations who want to accelerate the speed at which the latest knowledge in children’s emergency care is put into practice in general EDs – rural, remote or urban.

Dr. Helman, Dr. Mehta and Dr. Skolnic have no conflicts of interest to declare