This is EM Cases Episode 94 – UTI Myths and Misconceptions

In 2014, the CDC reported that UTI antibiotic treatment was avoidable at least 39% of the time. Why? Over-diagnosis and treatment results from the fact that asymptomatic bacteriuria is very common in all age groups, urine cultures are frequently ordered without an appropriate indication, and urinalysis results are often misinterpreted. Although we still appropriately manage most patients with UTI, we need to learn about some subtleties of clinical diagnosis, urine test interpretation and antibiotic choice to improve our management of UTI. So with these goals in mind, EM Cases’ Dr. Justin Morgenstern (@First10EM) and Dr. Andrew Morris (@ASPphysician), an infectious disease specialist and medical director of the antimicrobial stewardship program at Sinai Health System and University Health Network in Toronto, will help fine-tune your approach to the diagnosis and management of UTI as well as dispel some common UTI myths and misconceptions. Think of the last time you prescribed antibiotics to a patient for suspected UTI – what convinced you that they had a UTI? Was it their story? Their exam? Or was it the urine dip results the nurse handed to you before you saw them? Does a patient’s indwelling catheter distort the urinalysis? How many WBCs/hpf is enough WBCs to call it a UTI? Can culture results be trusted if there are epithelial cells in the specimen? Can a “dirty” urine in an obtunded elderly patient help guide management?…

History taking in patients who present with suspected UTI

While there is no single clinical symptom, sign or lab test that is accurate enough to rule in or rule out a UTI, certain symptoms in combination greatly increase the likelihood of a UTI. Even though only about half of patients who present with dysuria and frequency have a UTI, if you add the absence of symptoms suggesting vaginitis or cervicitis (vaginal irritation, bleeding, and discharge) the likelihood increases to over 90% with a +LR =24.6. Other helpful historical features include a self diagnosed UTI which has a +LR = 4 and urine cloudy appearance which has a specificity of 96% for UTI. 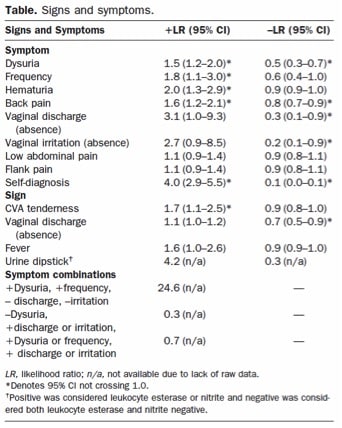 Which patients with a clinical presentation consistent with a lower UTI require a work-up for UTI?

Urine tests are not required for the majority of patients with suspected lower UTI (cystitis) as it is a clinical diagnosis and the urine tests can be misleading.

Urinalysis is most useful for intermediate-risk patients. Urine tests are not necessary for low-risk patients (they probably don’t have a UTI), nor for the patient with a convincing clinical presentation (you will treat regardless).

Indications for urine tests for suspected lower UTI include:

Pearl: UTI is a clinical diagnosis, not a laboratory one.

Microscopy vs dipstick in UTI myths and misconceptions

Microscopy is slightly more accurate than dipstick, but remember to put the results into context of the clinical picture.

So the dipstick shows…

If we use the dipstick in isolation, we end up overtreating 47% and undertreating 13% of UTIs.

So the microscopy shows…

If we use microscopy in isolation, we end up overtreating 44% and undertreating 11% of UTIs.

How to interpret epithelial cells and bacteria on urine microscopy

The classic teaching is that <5 epithelial cells per hpf represents an uncontaminated sample. However, while a ‘contaminated’ sample may negatively affect the ability to obtain a reliable culture, it does not affect the accuracy of the dip or microscopy to the same degree.

While bacteria seen on microscopy is predictive of a positive culture, it is not necessarily diagnostic of a UTI as the positive culture could represent a contaminant or asymptomatic bacteriuria.

A few more nuances to know about urine tests for UTI

Does the method of urine collection matter?

Midstream clean catch has traditionally been considered the standard for non-invasive urine collection, but many studies show that there is no difference between this method and simply asking the patient to urinate into a container. The latter has little if any effect on the urinalysis, and an insignificant effect on the culture.

For catheterized patients, the decision to treat is again a clinical one no different than the uncatheterized patient. It is not clear in the literature if catheterized patients are at a higher or lower risk for UTI and there is no evidence for prophylactic antibiotic treatment in patients with indwelling urinary catheters. It is important to remember that nearly 100% of patients with an indwelling catheter are colonized within 2 weeks of placement with 2-5 organisms and that there is no relationship between the level of pyuria and UTI in people with indwelling catheters. Candida is a very common finding in catheterized patients. Do not treat with anti-fungals unless the patient is neutropenic or has risk factors for systemic candidiasis. Conservative management for most will suffice, which includes replacement/removal of catheter and observation.

Pearl: Do not routinely treat catheterized patients found to have pyuria or candida in their urine

Approach to the altered, elderly patient with a suspicious urine sample

Unfortunately, there is little guidance in the literature when to treat these patients for UTI, but our experts suggest:

There are two approaches to STI screening in the ED:

Indications for imaging in patients suspected of pyelonephritis

Imaging is not routinely required for patients suspected clinically of pyelonephritis.

Imaging is indicated for those patients suspected of perinephric abscess, septic nephrolithiasis, or emphysematous pyelonephritis (these patients typically present with either severe pain and/or severe sepsis/septic shock) as well as those who have not responded to treatment >48-72hrs and to look for alternative diagnoses in the patient in which you do not have a very high pretest probability.

In a prospective, observational study of adults with febrile UTI from eight EDs in the Netherlands, a decision instrument was derived and validated which reduced radiologic imaging by 40% after implementation. The following 3 factors predicted ultrasound or CT findings with a NPV of 93% and urgent urological disorders (pyonephrosis or abscess) with a NPV or 99%, and in the validation study, the NPV for clinically relevant radiologic findings was 89% and for urgent urologic disorders was 100%.

General principles and considerations in choosing antibiotics for UTI

Note that the antibiotic choice should reflect its ability to eradicate E.coli, the most common bacteria found in 70-95% of lower UTIs, rather than more infrequently colonized bacteria such as pseudomonas, which is found predominantly in patients with upper UTI and immunocompromised patients or those with genitourinary anatomical abnormalities. Fluoroquinolones such as ciprofloxacin that are susceptible to pseudomonas should be avoided for treatment of lower UTI for this reason and because resistance to ciprofloxacin is increasing in many communities.

Note also that 3-5 days duration of therapy is sufficient for the vast majority of lower UTI.

While Fosfomycin is listed as first line, our experts recommend its use only after a failed first line antibiotic or for multidrug resistance lower UTI. Single dose Fosfomycin is equivalent to 7 days of nitrofurantoin and 3 days of TMP-SMX for UTI cure and is also effective against ESBL and VRE.

If fluoroquinolone resistance is thought to be >10%: B-lactams (Amoxacillin/Clavulinic acid (e.g. Clavulin or Augmentin) 875 mg PO q12hr for 14d) or

If fluoroquinolone resistance is thought to be >10%:

It is important to cover enterococcus as well as E.coli.

Does anything prevent recurrent UTIs?

Increased water intake, direction of wiping and voiding post intercourse have not been supported by evidence to prevent recurrent UTIs.

Evidence from clinical trials does not support the use of cranberry products (juice, powder or tablets) for the prevention of UTIs. Consumption of large quantities of cranberry juice may result in an interaction with warfarin and raise INR.

Are urinary anesthetics such as phenazopyridine (pyridium) recommended?

There is weak evidence for phenazopyridine as an urinary anesthetic. It was taken off the market in Canada because of side effects such as hemolysis in patients with G6PD and methemoglobinemia.

Drs Helman, Morgenstern and Morris have no conflicts of interest to declare. 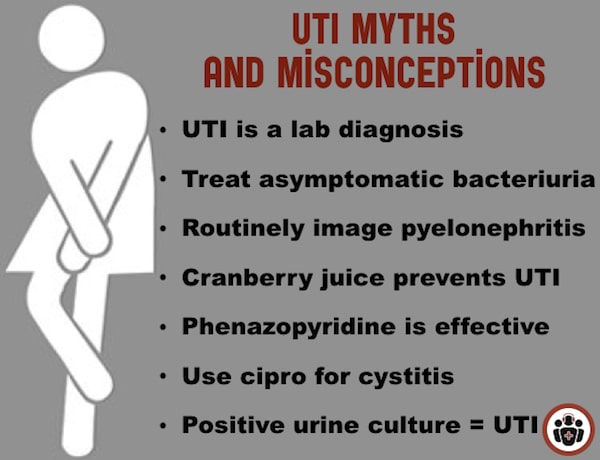 Other FOAMed Resources on UTI Myths and Misconceptions

LITFL on interpretation of urinalysis

EMdocs on the diagnosis and management of pyelonephritis