A lot has changed over the years when it comes to managing the adult in cardiac arrest. As a result, survival rates after cardiac arrest have risen steadily over the last decade. With the release of the American Heart Association ACLS Guidelines 2015 online on Oct 16th, while there aren’t a lot a big changes, there are many small but important changes we need to be aware of, and there still remains a lot of controversy. In light of knowing how to provide optimal cardio-cerebral resuscitation and improving patient outcomes, in this episode we’ll ask two Canadian co-authors of The Guidelines, Dr. Laurie Morrison and Dr. Steve Lin some of the most practice-changing and controversial questions.

In Part 1 of ACLS Guidelines 2015 – Cardiac Arrest Controversies we discuss the science and controversies around the following questions: What exactly determines ‘high quality CPR’ and how can we best achieve it? How do we best assess cardiac output during our resuscitation? How and when should we be giving epinephrine or vasopressin in the cardiac arrest patient? What’s the best way to manage refractory Ventricular Fibrillation? How soon do we need to intubate in cardiac arrest? and many more…

When you’re finished Part 1 Go HERE for Part 2 of this series on ACLS Guidelines 2015 Controversies: Post Arrest Care with a special guest appearance by Scott Weingart

Before we jump into the controversies it’s important to understand the basic theory of how best to achieve meaningful survival in the cardiac arrest patient. The concept of Cardiocerebral Resuscitation rather than Cardiopulmonary Resuscitation emphasizing high quality, minimally‐interrupted chest compressions to maximize blood flow to the brain, an important theoretical determinant of long term survival.

Circulation-Airway-Breathing as opposed to the classic Airway-Breathing-Circulation is how we should approach these patients because of the realization that arterial oxygen saturation remains high for the first 5‐10min of a cardiac arrest, that recoil of the chest during chest compressions improves oxygenation, that delaying a definitive airway increases survival, and that high quality continuous compressions improves survival.

Caveat: because children usually die as a result of asphyxia and respiratory complications, early ventilations should be emphasized in the pediatric population.

The recommended rate of chest compressions of 100-120 per minute, aiming for 110 per minute with audiovisual feedback such as a metronome (which is easily activated on most defibrillators), and the recommended depth of compressions is 5-6cm with visual feedback (which is also easily activated on most defibrillators). These recommendations are based on observational studies from the Resuscitation Outcomes Consortium (ROC) papers. 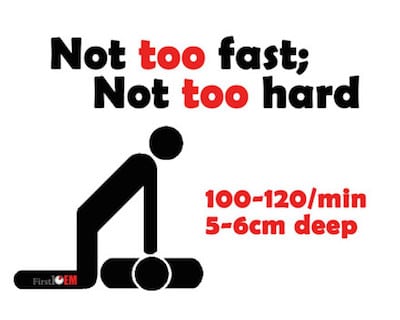 Created by Justin Morgenstern from First10EM

The guidelines suggest a compression to breath ratio of 30:2, however in Seattle, the survival rates for cardiac arrest overall have remained around 19-20%, and for Ventricular Fibrillation are 44%, the highest in the world, possible, in part due to a revision of the compression to breaths ratio. Rather than the recommended 30:2 compressions:breath ratio, in Seattle, the paramedics provide continuous chest compressions. On the 10th compression, the provider handling the breathing gives a single 500cc breath, in between compressions, without any pause in compressions. The only time that Seattle paramedics pause compressions is to shock the patient, and even then, once they have determined that the patient is in ventricular fibrillation, while continuing compressions, they count down out loud and pause compressions for only a single, hands-0ff beat to re-administer a shock every 15 compressions until signs of ROSC are apparent. Experimental data out of England shows that, using gloves, the maximal energy delivered to a provider providing hands-on compressions without any pause for defibrillation is less than the average house hold electrical current, suggesting that hands-on defibrillation may be safe.

2. Do not check for the pulse at all! Chest compressions should continue until your end tidal CO2 monitor shows persistent elevations. The argument here is that palpating for a pulse has been shown to be insensitive, not specific and have poor inter-rater reliability. One study showed that rescuer pulse palpation was only 78% accurate. Even if a pulse is felt, this does not guarantee adequate perfusion to vital organs. Dr. Morrison suggests stopping chest compressions only to assess for defibrillation and to defibrillate. An alternative to manual pulse checks suggested by Dr. Weingart in Part 2 of this series is to establish an early arterial line so that the moment a pause in chest compressions occurs, providers know if there is an increase in arterial pressure.

Update 2015: Trial in NEJM compares continuous vs interrupted chest compressions (30:2) and finds that as long as the chest compression fraction is >75% then there appears to be no difference in survival to hospital discharge. Abstract. Analysis on The Bottom Line.

The Role of Capnography in Cardiac Arrest

ETCO2 capnography is mandated in the 2015 Guidelines to be used to:

1. Confirm endotracheal intubation with an increase in ETCO2

3. An increase of ETCO2 35-40 may indicate adequate tissue oxygenation and can be used to confirm return of spontaneous circulation (ROSC), however our experts recommend continuing CPR after the initial spike of ETCO2.

Pitfall: stopping chest compressions immediately after an ETCO2 of 35-40 is recognized

The Role of Chest Compression Devices in Cardiac Arrest

The Guidelines recommend considering the use of compression devices in environments where manual compressions may be difficult or impossible due to physical constraints (eg: small cabins of some rescue helicopters). Mechanical CPR should be considered in situations where rescuer fatigue is a concern or prolonged CPR is anticipated, such as in a hypothermic arrest.

Impedance threshold Devices (ITD) are circulatory devices which are applied to the endotracheal tube (ETT) or the bag-valve-mask (BVM) and increase perfusion to the right side of the heart. In a ROC study patients randomized to ITD vs sham ITD showed no superiority of the ITD.

Some experts believe that the reason mechanical CPR devices have not shown superiority is because of inadequate training resulting in long chest compression pauses while placing the machine on the patient and hence decreased perfusion, but with adequate training that minimizes the pause in chest compressions while placing the machine on the patient, they may prove to be clinically superior to manual compressions in achieving ROSC and perhaps long term outcomes.

There has never been an antiarrhythmic medication

that has shown any long term survival benefit in cardiac arrest

Amiodarone 300mg IV bolus is still recommended as the antiarhythmic of choice for refractory ventricular fibrillation.

In one study from the 1990’s comparing Amiodarone to placebo in refractory ventricular fibrillation, a higher rate of ROSC was achieved.

In a study from the NEJM out of Toronto, pre-hospital ventricular fibrillation patients were randomized to amdiodarone vs lidocaine, and amidorone showed a higher rate of ROSC compared to lidocaine, however the death rate in hosptial in the amiodarone group was higher than that of the lidocaine group. Overall, survival at discharge from hospital was similar in both groups.

The Amiodarone vs Lidocaine vs Placebo (ALPS) Trial is currently ongoing with a projected release in early 2016.

Update 2018: A systematic review of 14 RCTs and 17 observational studies in adults, and 1 observational study in pediatrics, showed no benefit of anti-arrhythmic drugs during CPR for shockable cardiac arrest with respect to survival at hospital discharge, favourable neurologic function and long-term survival. Lidocaine did show improved ROSC compared to placebo. Abstract

Dual Shock Therapy involves defibrillating patients who are refractory to multiple defibrillations with 2 defibrillators at the same time or within seconds of each other, one with pads set up in the traditional anterior positions and the other set up with anterior-posterior pad positions. 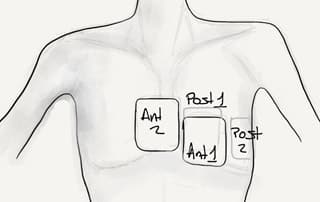 By Charles Bruen from Resus Review

An RCT in 1989 by Bardy randomized patients with refractory ventricular fibrillation to dual vs single shock therapy and found no significant difference in ROSC.

It is unknown based on current evidence whether the improved rates of ROSC with dual shock therapy are due to chance alone or due to the increase in energy or multiple vectors of energy delivered to the heart.

Dual shock therapy for refractory ventricular fibrillation is not recommended in The Guidelines.

Despite the lack of evidence that dual shock therapy improves survival, our experts recommend attempting it when other

avenues have been exhausted in the patient with refractory ventricular fibrillation.

Epinephrine and Vasopressin in Cardiac Arrest

There has never been a vasopressor medication

that has shown any long term survival benefit in cardiac arrest

Epinephrine has been shown in RCTs to improve rates of ROSC and admission to hospital, however one large pre-hospital study of Japan, while also showing improved rates of ROSC, showed worse 1 month survival rates with epinephrine.

Update 2018: Among patients who have suffered out of hospital cardiac arrest with a non-shockable initial rhythm, each minute delay in epinephrine administration was associated with decreased survival and unfavorable neurological outcomes. Abstract

Update 2018: PARAMEDIC2 trial. A randomized double-blind controlled trial involving 8014 patients with out of hospital cardiac arrest (OHCA), demonstrated improved 30-day survival with epinephrine versus placebo, but had poorer neurologic outcomes at discharge and at 30 days. Abstract.


Multiple factors may contribute to the effectiveness of epinephrine in cardiac arrest:

The Guidelines recommend administering epinephrine as early as possible in the resuscitation.

One observational study of cardiac arrest with non-shockable rhythm compared epinephrine given at 1 to 3 minutes with epinephrine given at 3 later time intervals (4 to 6, 7 to 9, and greater than 9 minutes). The study found an association between early administration of epinephrine and increased ROSC, survival to hospital discharge, and neurologically intact survival.

Dose and Frequency of Administration

Some experts believe that the dose of 1mg every 3-5 minutes that is recommended in the guidelines is too high a dose, is too frequently given and may be detrimental. Epinephrine, in the doses used in cardiac arrest, causes cerebral vasoconstriction that may impair tissue oxygenation, brain perfusion and compromise neurological recovery.

Scott Weingart describes titrating epinephrine in cardiac arrest to hemodynamic parameters and end tidal CO2 in this EMCrit podcast, and in Part 2 of this podcast. Titrating to diastolic BP, as described in the Paradis study in JAMA requires early placement of an arterial line during ongoing chest compressions. While end tidal CO2 is an excellent marker for chest compression quality and determining ROSC, titrating epinephrine to end tidal CO2 goals have never been shown to be associated with long term outcomes.

A physiologic measure of brain oxygenation measured by near-infrared spectroscopy may be a better marker to titrate epinephrine to in cardiac arrest, but currently there is no evidence in the literature to support its use.

In patients with non-shockable rhythms (PEA, asystole), early administration of epinephrine may be more beneficial than in patients’ whose presenting rhythm is ventricular fibrillation.

Vasopressin is difficult to draw up compared to the pre-filled epinephrine syringes and has not been shown to be superior to epinephrine in terms of survival benefit in cardiac arrest patients for out of hospital cardiac arrest. It has therefore been removed from The Guidelines.

The Guidelines do state that vasopressin may provide some benefit when administered with steroids and epinephrine in treating in-hospital cardiac arrests. However, routine use of this bundle is not recommended. This was based on a controversial study in 2013 out of JAMA in Greece with 268 patients which showed that the combination of vasopressin, epinephrine and steroids significantly improved survival to discharge with good neurological outcome compared to only epinephrine and placebo. However, our experts suggest that due to methodological flaws in the study, they cannot recommend it’s routine use as per The Guidelines.


with a special guest appearance by Scott Weingart

The full AHA Guidelines in Circulation

Dr. Helman, Dr. Morrison & Dr. Lin have no conflicts of interest to declare

Justin Morgenstern’s summary of The Guidelines on First 10 EM

The Role of POCUS in cardiac arrest from Rebel EM