In this episode on Pulmonary Embolism we have the triumphant return of Dr. Anil Chopra, the Head of the Divisions of Emergency Medicine at University of Toronto, and Dr. John Foote the CCFP(EM) residency program director at the University of Toronto. We kick it off with Dr. Foote’s  approach to undifferentiated dyspnea and explanation of Medically Unexplained Dyspea (‘MUD’) and go on to discuss how best to develop a clinical pretest probability for the diagnosis of pulmonary embolism using risk factors, the value of the PERC rule, Well’s criteria and how clinical gestalt plays into pre-test probability. Dr. Chopra tells about the appropriate use of D-dimer to improve our diagnostic accuracy without leading to over-investigation and unwarranted anticoagulation. We then discuss the value of V/Q scan in the workup of PE, and the pitfalls of CT angiography. A discussion of anticoagulation choices follows and the controversies around thrombolysis for submassive PE closes the podcast. Dr. Chopra & Dr. Foote answer such questions as: What are the most important under-recognized risk factors for pulmonary embolism, and how does the absence of risk factors change the pre-test probability of PE? Should we be using D-dimer in pregnant patients? How does the D-dimer value change with age and how can we incorporate this into our work-up? How does an experienced doctor’s clinical gestalt compare to clinical desicion rules in working up PE? In what situations is V/Q scan preferred over CT angiogram for the diagnosis of PE? How should we manage patients with subsegmental PE found on CTA? What is the danger of aggressive fluid resuscitation in patients with massive PE? Which patients can be sent home from the ED with PE? Should we thrombolyse patients with submassive PE? What is Medically Unexplained Dyspnea (MUD) and how can we identify these patients and avoid lengthy work-ups?

APPROACH TO THE PATIENT WITH DYSPNEA

COPD patients are at higher risk than the general population for PE, CHF, pneumonia, tamponade, pneumothorax, and MI

A condition characterized by a sensation of a need to take a deep inspiration or the feeling of an ‘oppressive’ chest plus symptoms of anxiety, in the absence of wheeze, cough, or sputum, ECG, CXR, or peak flow abnormalities, and without cardiopulmonary explanations for their dyspnea.  It has been called “the IBS of respiratory”.  Patients are often over-investigated without significant findings.  A diagnosis of MUD should not be made on a single ED visit, but should be considered in patients who have had extensive previous work-up for the same symptoms in the past.

Varicose veins are a risk factor for Pulmonary Embolism, but when they generate clots, they may be less likely to embolize

Note: 20% of Pulmonary Embolism patients will have no identifiable risk factors at presentation.

Update 2017:  Prospective data from this Lancet cohort study led authors to conclude the YEARS algorithm approach to PE management resulted in an absolute 14% decrease in CTPA examinations amongst all ages.  While promising, the study requires further external validation. Abstract

D-dimer in the work-up of Pulmonary Embolism

Overuse of the D-dimer can lead to over-investigation and anticoagulation, unless used wisely and in the correct clinical context.

Is D-dimer useful in pregnancy?

What about the elderly?

What about a patient on Warfarin?

Use Well’s criteria (3) to assess pretest probability for Pulmonary Embolism:

Immobilization at least 3 days, or surgery in the previous 4 weeks +1.5 points

Malignancy with treatment within 6 months, or palliative +1 point

If the patient is determined to be low risk (

Alternatively consider a rule-out criteria such as PERC (see below).

If the D-dimer is negative consider stopping the workup.

If the D-dimer is positive consider chest CTA.

If the patient is determined to be moderate risk (score 2-6 points, 16.2% incidence of PE), consider high sensitivity D-dimer testing or chest CTA.

If the patient is determined to be high risk (score >6 points: 37.5% incidence of PE) consider chest CTA. D-dimer testing is not recommended.

The “Pulmonary Embolism Rule-Out Criteria” (PERC) is a step 2 decision support for excluding PE. If none of the eight PERC features are present in a patient that has been deemed low risk by Well’s criteria or by clinical gestalt, then no further tests are indicated.

Surgery or trauma in past 4 weeks

The PERC rule is only accurate when applied to LOW risk patients.

What are the Chest X-Ray Findings for Pulmonary Embolism?

Although the CXR may appear unremarkable, about 75% of patients with Pulmonary Embolism have findings resulting from the clot, such as an elevated hemi-diaphragm, a unilateral pleural effusion, enlarged pulmonary arteries, and even infiltrates.

In young patients with pleuritic chest pain, a pleural effusion increases the likelihood of PE.

Uncommon findings of Pulmonary Embolism (see below) have low sensitivity for detecting PE.

Uncommon findings for Pulmonary Embolism include: 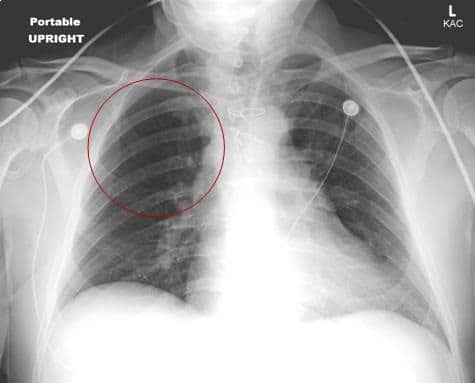 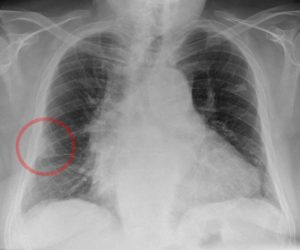 ECG is useful to rule out other diseases, and~30% will be normal. ECG findings that may suggest PE include:

Do all patients with Pulmonary Embolism patients require admission?

Aujesky and colleagues reported outpatient management for PE was not inferior to management in hospital, for hemodynamically stable patients with no significant comorbidity, who could be safely anticoagulated, and closely followed as outpatients.

Once diagnosed, PE therapy begins with anticoagulation. LMWH (Fragmin or Enoxaparin) or Fondaparinux for at least 5 days and the INR=2.0-3.0, plus Warfarin

Update 2016: NOACs for treatment of PE

NOACs: Dabigatran (Pradaxa®), Rivaroxaban (Xarelto®), Apixaban (Eliquis®)
These NOACs have been shown in large studies to be effeictive for the initial (rivaroxaban, apixaban), acute (all agents) and extended (all agents) treatment of PE.

Dosages of NOACs for Pulmonary Embolism

Note that 5 days of therapeutic LMWH should be administered prior to the initiation of Dabigatran when this anticoagulant is used for the treatment of PE.

Update 2018: A prospective, randomized controlled trial of 114 patients showed low-risk ED pulmonary embolism patients (as per Hestia criteria) who received rivaroxaban and were discharged from the ED, had similar outcomes to standard of care, shorter hospital stay and lower costs over 30 days. Abstract

Massive Pulmonary Embolism: acute PE with sustained hypotension (systolic blood pressure 15 minutes or requiring inotropic support, not due to another cause), pulselessness, or profound bradycardia.

Thrombolysis is indicated in massive PE.

Submassive Pulmonary Embolism: no sustained hypotension, but either RV dysfunction (based on echocardiography, CT, BNP, Tropinin or ECG evidence) and/or myocardial necrosis (based on troponin elevation).

Our experts do not recommend thrombolysis in submassive PE. However, some experts believe that lytics are

indicated if there is evidence of present or developing circulatory or respiratory insufficiency; or moderate to severe RV injury.

Update 2017: A recent RCT found that thrombolytic therapy for submassive pulmonary embolism did not provide a mortality benefit, nor a change in dyspnea scores or the development of pulmonary hypertension at 3 years post-treatment. Abstract

Dr. Helman, Dr. Chopra and Dr. Foote have no conflicts of interest to declare

Brit Long blogs on Pulmonary Embolism: Management of the Unstable Patient on emDocs 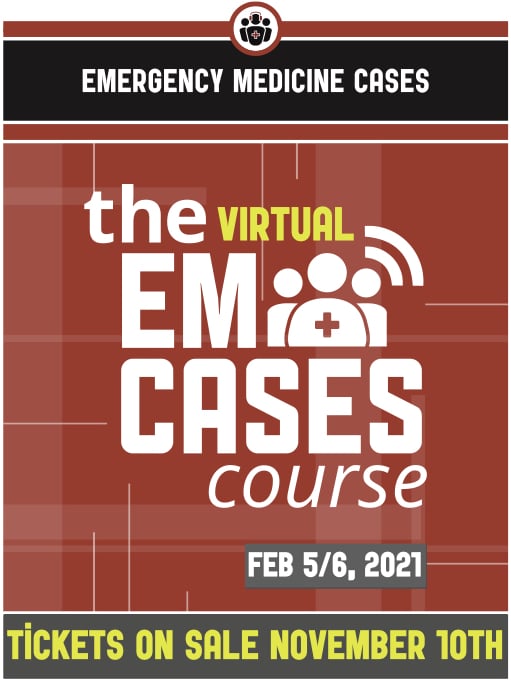