In this ECG Cases blog we look at 8 patients with potentially ischemic symptoms, none of whom had STEMI on the 12 lead ECG. Which had occlusion MI?

Eight patients presented with potentially ischemic symptoms. Which had an acute coronary occlusion?

Case 1: 80yo with one day weak/dizzy, no prior ECG 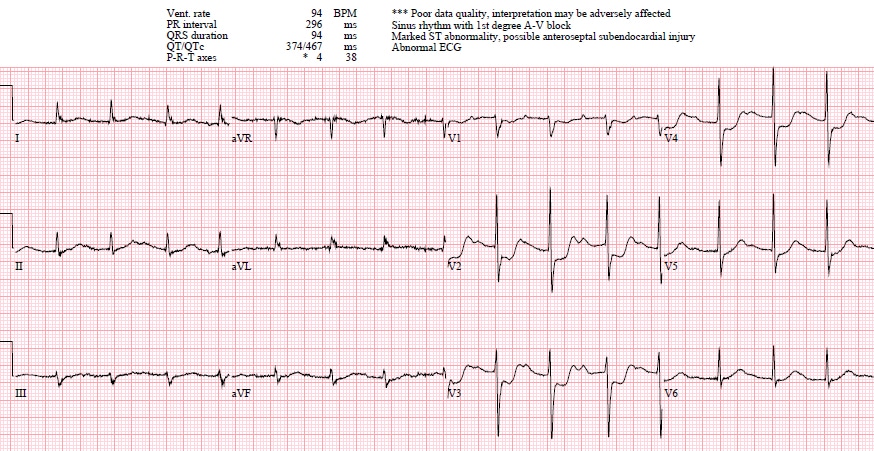 Case 3: 40yo acute chest pain with diaphoresis, no prior ECG 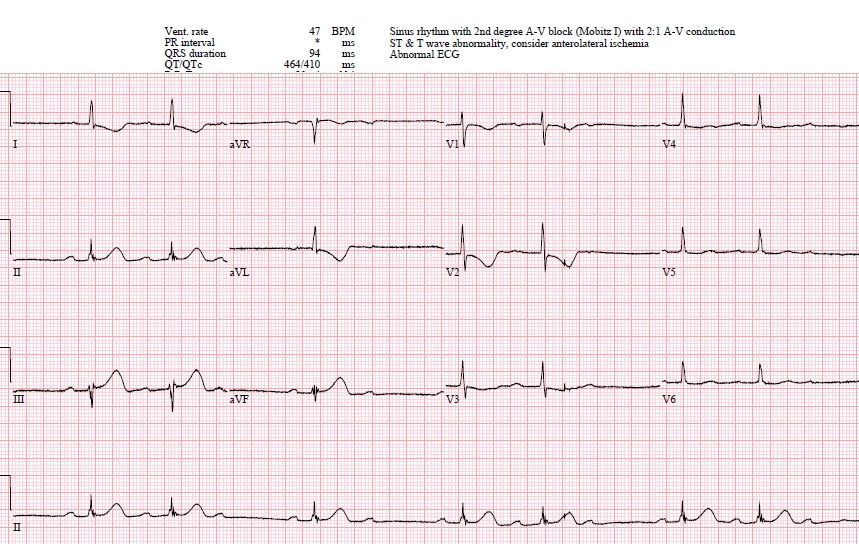 Case 5: 60yo with acute chest pain, old then new ECG 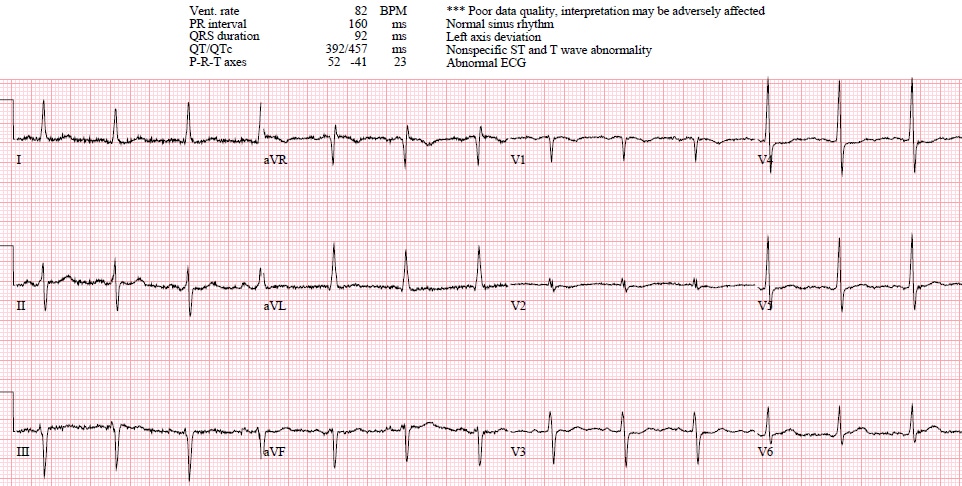 Case 6: 55yo with recurring bilateral shoulder pain, now constant; no prior ECG 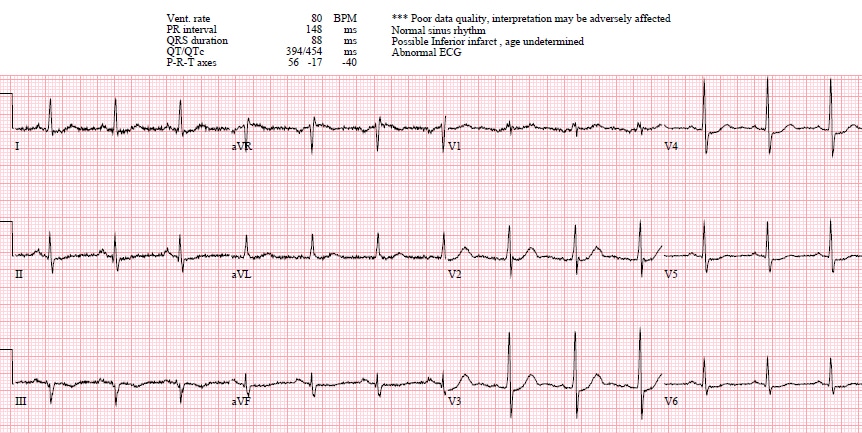 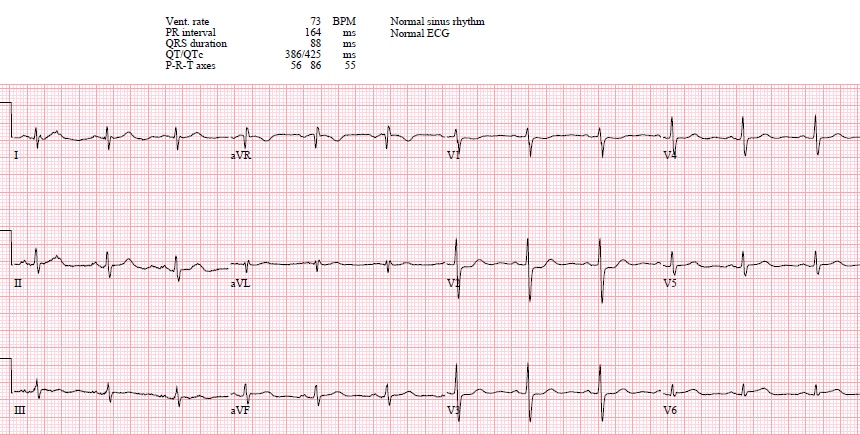 Posterior myocardial infarctions have always had a tendency of being overlooked, not because they are invisible on the 12 lead ECG but because they do not conform to the dominant paradigm. When MIs were dichotomized as Q wave vs non-Q wave MI, posterior MIs were missed because they did not produce Q waves. A study in 1964 found that posterior MIs produce tall anterior R waves, and differentiated it from other causes (pediatric ECG, WPW, RBBB, RVH, and normal variant). But “because of this absence of pathologic Q waves, strictly posterior infarction is one of the most commonly overlooked electrocardiographic abnormalities.” (1).

When the paradigm changed to STEMI vs NSTEMI, posterior MIs were still missed because they didn’t produce ST elevation on the 12 lead. A study in 1987 found that the ST depression in posterior MI is isolated to the right precordial leads, is horizontal in morphology, and is associated with upright T waves–all features that helped to differentiate it from subendocardial ischemia and other causes of ST depression. But “the arbitrary exclusion of all patients with prolonged chest pain and precordial ST segment depression appears to categorically eliminate patients with evolving posterior MI, whose infarct related coronary artery would be, in most instances, either the left circumflex coronary or dominant right coronary artery with sizable posterior descending or posterolateral branches.” (2)

Decades later, posterior MI is still under-recognized: among nearly 1200 ACS patients with ST depression isolated to leads V1-4, a quarter had occluded arteries (half of which were circumflex), but the average time from ECG to reperfusion was 29 hours, leading to a higher mortality rate. (3) A paradigm shift from STEMI to Occlusion MI (OMI) puts the focus back on the diagnostic signs of occlusion that don’t require Q waves or ST elevation thresholds. As a review of posterior MI summarized,

“From the perspective of the standard 12-lead EKG, the ‘typical’ electrocardiographic findings indicative of acute transmural myocardial infarction will be reversed. This reversal results from the fact that the endocardial surface of the posterior wall faces the anterior precordial leads (V1-3) in the standard 12-led EKG. In other words, STD, prominent R waves, and upright T waves in leads V1 through V3–‘when reversed’–represent STE, Q waves, and T wave inversion, respectively, of acute PMI. If one considers the ‘reversed nature’ of these electrocardiographic abnormalities when applied to the posterior wall, the findings assume a more recognizable, ominous meaning…The presence of an upright T wave, although more commonly seen in patients with posterior wall infarction, is not a reliable indicator of PMI. The polarity of the right precordial T wave may, in fact, be related to the age of the infarction with early PMI presenting with inverted T waves and more established infarcts manifesting with upright T waves.”(4)

Back to the cases

Impression: Possible posterior MI, but could be old or baseline, in patient without classic symptoms; posterior leads done:

About the Author: Jesse McLaren

Dr. Jesse McLaren (@ECGcases), is an Emergency Physician in Toronto with a special interest in emergency cardiology quality improvement and education. He is an Assistant Professor at the University of Toronto.