Dr. Walter Himmel, “the walking encyclopedia of Emergency Medicine” & Dr. Dan Selchen, the head of the stroke program at St. Micheal’s Hospital in Toronto with  30+ years of experience as a stroke neurologist, update us on the literature regarding Emergency Stroke Controversies including the ABCD2 Score to predict Stroke after TIA, as well as the current thinking around the best carotid imaging  for patients who have had a TIA. They then review the important findings of the key thrombolysis stroke trials & how we could incorporate these findings into our daily practice. Dr. Selchen reviews the key CT findings we should look for in stroke, & Dr. Himmel takes us through how to manage the dreaded complication of ICH post thrombolysis. This episode is super controversial – so please ‘speak your mind’ at the bottom of the page.

Dr. Himmel and Dr. Selchen answer questions such as:  Should we be ordering CT angiograms of the neck in the ED for our patients with TIA or stroke? Should elderly patients be excluded from lytic protocols? Should community hospitals be using lytic for stroke or only stroke centres? Is there a role for intra-arterial thrombolysis? Are rapidly resolving or fluctuating symptoms a contra-indication to lysis for stroke? What are the key early signs of stroke on CT that ED docs should know about and why? What CT findings are contraindications to lytic? What are the most important supportive measures that we can do to improve our patients’ outcomes?

Update on ABCD2 Score to Predict Stroke Risk after TIA

Ann Emerg Med. 2011;57:46-51. In population that was treated very aggressively with early carotid + brain imaging and treatment, the rate of stroke was independent of the ABCD2 stratification.

CMAJ. July 12th, 2011;183(10). Sensitivity & specificity for predicting stroke 7 and 90 days after ED visit for TIA. Found that ABCD2 score is inaccurate at any cut-point as a predictor of stroke.

ABCD2 should not be used as rigid rule, but still helpful as a rough guide in determining which patients need urgent follow- up and aggressive investigation. Some argue that every patient with a probable TIA should be worked up urgently. A low ABCD2 score does not necessarily mean that the patient is at low risk for stroke, especially if posterior circulation TIA.

Update on Carotid Imaging for TIA

Consider Carotid Doppler Ultrasound or CT Angiogram of the neck in the ED for high risk TIA patients, to determine those with carotid artery stenosis who would benefit from time-sensitive early surgical intervention with carotid endarterectomy.

Prior to NINDS, thrombolytic trials showed negative results because of either higher dose of lytic or concomitant treatment with anticoagulants resulting in an unacceptable rate of ICH.

ECASS-3 trial 2008: trial of 3-4.5hr, where patients did better than no thrombolytics, but not as good as patients treated earlier. Different exclusion criteria compared to NINDS (eg: excluded diabetics). This trial showed benefit compared to ATLANTIS because they paid more attention to excluding patients based on imaging results and because the bulk of patients were treated earlier (<4hrs).

Dr. Himmel & Selchen’s Conclusions: There is a linear relationship between time to treatment and improved functional outcome in carefully selected patients in a systematized protocol, but no mortality benefit.

Should Elderly be excluded from thrombolysis protocols?

Should community hospitals be using thrombolysis for stroke?

Volume of Infarct and Ischemic Penumbra as a factor in deciding lytic treatment: A small volume of infarct with a large surrounding ischemic penumbra is more likely to benefit from lytic compared to a large infarct with small penumbra. CT perfusion scanning or diffusion MR is used in some centres to determine size of infarct and penumbra which helps neurologists make lytic decisions in the later time window even beyond 4.5hrs, although data is not strong enough currently to make any definitive recommendations.

Intra-arterial (IA) thrombolytics: for ‘late presenters’ and for certain stroke types (eg: in large upper internal carotid or very proximal MCA clots seen on CT angiogram), patients do not derive benefit from IV thrombolytics, so IA t-PA is either added to IV lytic or used alone in the cath lab up to 6hrs after symptom onset for anterior circulation, and up to 12hrs for basilar occlusion. The ED doc needs to make the call to interventionist within 4hrs of symptom onset in anterior circulation strokes and within 10hrs in posterior circulation stroke for consideration of IA lytics to allow time for transfer and cath lab activation.

Some Issues around Contraindications to thrombolytics:

Rapidly resolving or fluctuating deficits may mean collateral circulation is temporarily perfusing brain tissue, and therefore is NOT an absolute contraindication. If a patient improves to a point where there is still a significant functional deficit they may still benefit from thrombolytic.

INR should be below 1.5-1.7 – Do you need to wait for INR result before giving lytic? If answer is “no” to the 3 following questions, one study showed 100% sensitivity for normal INR: use of warfarin? use of heparin? and hemodialysis? (also consider bleeding diathesis and liver disease)

Update 2015: Position statement on the use of thrombolytic therapy for acute ischemic stroke from CAEP here.

An analysis of the MR-CLEAN, ESCAPE and EXTEND-IA trials on EM Lit of Note. 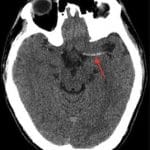 Dr. Selchen’s Tips on Informed Consent for Lytic: the patient is often not able to provide informed consent because of ‘stunned brain’ from the stroke, so next of kin should be contacted. Explain that t-PA is not a ‘miracle drug’

(i.e. doesn’t work in every patient) with benefit of 13-25% that outweighs the hemorrhage risk of 6% (in the brain and the gut most likely) – if no family member available, argument for treatment with t-PA as the standard of care is possible (i.e. treat as a surgical emergency – “treat now and discuss later”)

Consider symptomatic intracranial hemorrhage if patient develops severe headache (especially if associated with vomiting) or new neurologic symptoms – stop t-PA and obtain plain CT head, and consider giving 10u of cryoprecipitate (to replace the fibrinogen) and a pool of platelets – Recombinant Factor VIIa and Prothrombin Complex Concentrates are not indicated; neurosurgery does not need to be involved immediately given that an operation would be contraindicated right after giving a thrombolytic

Other ED supportive measures (as per AHA guidelines): intubation as necessary, oxygen to maintain O2 >92%, IV fluids: normal saline to maintain euvolemia, avoid hyperglycemia (<10mmol/L) – note that there is no benefit to ‘tight’ glucose control (4-7mmol/l) and keep patient normothermic (tylenol PRN), Foley catheter if retention to avoid excessive hypertension, and resist urge to decrease blood pressure dramatically: goal of <220/120mmHg (or MAP <150) if not thrombolysed, and <185/110mmHg (or MAP <130) if thrombolyzed – decrease by 10-15% with IV labetalol or nicardipine

=>3 numbers to remember for BP goal in stroke: MAP for ischemic stroke not thrombolysed, MAP <130 if thrombolyzed, MAP <110 for ICH

Antiplatelets and Heparin for Ischemic Stroke

Antiplatelets: Similar to TIA; as soon as CT scan shows NO hemorrhage: ASA 160-325mg chew or crushed down NG tube or rectally, or for ASA allergy or failure, Clopidogrel (Plavix) 300mg load then 75mg daily (if allergy to or failed ASA), or Aggrenox BID (but often causes headaches)

Heparin: very unusual to give to stroke patient (except in the setting of of extra-cranial carotid/vertebral dissection, crescendo stroke), and should be discussed with neurologist

Delay starting Warfarin for a few days after massive stroke because of high risk of hemorrhagic transformation and lower risk of repeat stroke in the first few days, but start Warfarin 5mg right away after small strokes given low risk of

For more on anticoagulation for Atrial Fibrillation see Episode 57, Episode 36 and Episode 20

Dr. Himmel, Dr. Helman and Dr. Selchen have no conflicts of interest to declare.