Join Anand Swaminathan, Salim Rezaie and Jeannie Callum to discuss the management of some of our most challenging GI bleed emergencies. In this Part 1 of our two part podcast on GI bleed emergencies we answer questions such as: How do you distinguish between an upper vs lower GI bleed when it’s not so obvious clinically? What alterations to airway management are necessary for the GI bleed patient? What do we need to know about the value of fecal occult blood in determining whether or not a patient has a GI bleed? Which patients require red cell transfusions? Massive transfusion? Why is it important to get a fibrinogen level in the sick GI bleed patient? What are the goals of resuscitation in a massive GI bleed? What’s the evidence for using an NG tube for diagnosis and management of upper GI bleeds?  In which patients should we give tranexamic acid and which patients should we avoid it in? How are the indications for massive transfusion in GI bleed different to the trauma patient? What are your options if the bleeding can’t be stopped on endoscopy? and many more…

How to distinguish LGIB from UGIB

STEP 1: Is the patient hemodynamically unstable?

As a general rule, if a patient is hemodynamically unstable, assume UGIB because UGIB is more prevalent and is associated with a higher mortality.

STEP 2: Is there bright red blood per rectum (BRBPR) with clots or hematemesis?

BRBPR with clots can be considered almost pathognomonic for a LBIB while hematemesis can be for an UGIB source.

Note that LGIB can manifest as melena and conversely, brisk upper GI bleed can manifest as hematochezia (without clots) in about 15% of cases. Melena on history was found to have an 80% sensitivity for UBIB with a +LR = 5.9 in a large systematic review in JAMA 2012 [1].

The same JAMA systematic review found that a BUN:Cr ratio >30 is 93% specific for UGIB, with a +LR = 7.5. Note the units are mg/dL as used in the U.S. For other countries first divide the Creatinine by 88.42 (or roughly 100) before calculating the ratio.

A study examining ED predictors of UGIB without hematemesis in 2006 found that 3 factors independently predict an UGIB source [2]:

In a large population based study of asymptomatic adults out of Taiwan in 2011 the sensitivity of fecal occult blood testing for predicting a LGIB source of bleeding was only 24.3%, the specificity 89.0%, the +LR = 2.22, the -LR = 0.85 and the accuracy 73.4%. While these were not ED patients with suspected GI bleed, the results give us a general idea of the limitations of FOBT [3].

Remember the imitators of melena such as iron, bismuth and black foods like black licorice. While many patients describe their stool as black, true melena is pitch black against white paper, is of tarry consistency and has a certain putrid odour.

Securing the airway in patients actively hemorrhaging from an UGIB is both a priority and a challenge. You may need to alter your standard approach.

Peptic Ulcer Disease (PUD) is the most common UGIB in all comers is from PUD in up to 67% of cases.

Varices should be assumed the cause of UGIB in those with evidence of liver disease. These are high pressure systems that can bleed quickly. These patients often have co-morbidities that reduce their physiologic reserve.

Aorto-enteric fistulae cause rapid and severe bleeding that is rarely indolent. Look for surgical scars. These patients die quickly.

Avoid excessive crystalloid resuscitation. While there is no literature to guide us specifically in this patient

population a general rule of thumb is that hemodynamically unstable bleeding patients need blood products. Practically speaking, there are often delays in obtaining blood products, so our experts recommend giving a minimum amount of fluid to maintain MAP > 60 mm Hg.

Shock index: A shock index (HR/SBP) of >1 should trigger consideration for massive transfusion

Don’t trust the Hb: Hemoglobin often lags behind bleeding, so trend it by repeating the hemoglobin in an hour or two.

Be flexible: Lower your threshold to transfuse in patients with co-morbidities such as coronary artery disease or coagulopathy.

While there is no specific literature for hemoglobin transfusion thresholds for LGIB a landmark study out of NEJM in 2013 in patients with stable UGIB suggested that a hemoglobin threshold of 7 for red cell transfusion [6].

Stable UGIB patients in the liberal transfusion arm (Hb<9) had increased bleeding, higher mortality, increased need for surgery and increased length of stay when compared to the restricted transfusion group (Hb<7). Note that this study was conducted in a highly controlled environment with rapid access to endoscopy and therefore, may not be applicable to resource limited settings.

GI bleed patients bleed differently compared to trauma patients. GI bleeds do not impart the same hyperfibrinolysis of that of a trauma bleed and so do not require as much coagulation support. A close look at the TRIGGER Study [7] out of the UK, reveals that only 5% of variceal bleeds require a massive transfusion protocol. In other words, 95% of GI bleed patients require only red cell transfusions. Over-activation of massive transfusion protocols lead to unnecessary

complications such as Transfusion Associated Circulatory Overload (TACO) and wasted blood products. The following are Jeannie Callum’s recommendations for when to trigger a Massive Transfusion Protocol and what tests to order.

Pitfall: Administering plasma for liver patients with an elevated INR.  Patients with liver disease and high INRs are not at the same bleeding risk as those on Warfarin and have high INRs. They will therefore not require the same plasma therapy.

Trigger: Know when, know how to activate your local MTP.

Termination: Know when to stop an MTP based on hemodynamics and hemoglobin level and redirect blood products back to the blood bank for use in other acute patients.

Pitfall: Forgetting to order fibronogen level in patients requiring massive transfusion. An initial fibrinogen is essential to help assess the need for cryoprecipitate administration in the massive GI bleeder.

Though intuitive that replacing platelets for those on medications that inhibit platelet function, studies such as the PATCH Trial for intracranial hemorrhage [8] have found that there is an increased risk of death and length of hospitalization due to associated thromboembolism. As such, platelet replacement therapy should probably be avoided in GI bleed patients who are taking anti-platelet agents.

Is a Nasogastric (NG) tube required in GI bleed emergencies?

Therapeutic NG: Expert opinion recommends placing an NG tube in order to empty the stomach to optimize ETT placement and endoscopy visualization as well as to minimize the chances of hematemesis with aspiration in UGIB patients.

Diagnostic NG: Aspirate to help localize the bleeding source. This is controversial.

A retrospective study in 2004 [2] revealed a +LR o= 11 for detecting an UGIB if the NG aspirate was bloody. However, the -LR = 0.6. Diagnostic if you see blood but not reassuring if you don’t see blood. A systematic review in 2010 showed an overall sensitivity ranging from 42% to 84% [9].  There is a high false negative rate due to intermittent bleeding or duodenal bleeding.

It is important to recognize that NG tube placement is one of the most painful procedures in emergency medicine [10].

Timing and location of endoscopy

Based on a 2016 systematic review of 12,000 patients [11] endoscopy within 6-24 hours of presentation has a lower in-hospital mortality compared with endoscopy outside this time frame for all patients except those that are stable with an American Society of Anesthesiologist (ASA) score of 1-2.

For unstable patients, the sooner the better, but don’t forget to “resuscitate before you endoscopate” as patients who are not fully resuscitated prior to endoscopy are at high risk of crashing during endoscopy.

The location of endoscopy depends on several factors. Hemodynamically unstable patients, those with active hematemesis and those with ongoing resuscitation should be scoped in the ED.

What is the next step if the culprit lesion cannot be found on endoscopy?

The next step after a failed endoscopy depends on how stable the patient is. For unstable patients a rapid surgical and interventional radiology consult is paramount. For stable patients, CT angiography can be valuable in locating the source of bleeding.

There is little data to guide our resuscitation in this patient population. Extrapolating from trauma literature, there are a few goals recommended by Dr. Callum: 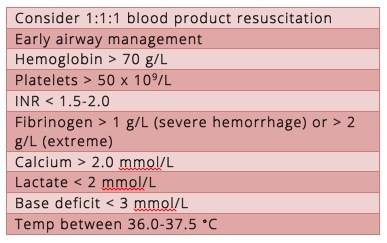 Should Tranexamic Acid (TXA) be given for all patients with GI Bleed?

Our experts recommend administering TXA for all hemodynamically unstable GI bleed patients who do not have specific contraindications (see below).

For UGIB patients there is moderate evidence for improved survival with TXA based on a 2014 systematic review [13]. A 2012 Cochrane review showed no significant difference in bleeding, surgery, or transfusion requirements although there was a trend toward reduction in bleeding and mortality [14].  Overall, there are insufficient data on the effectiveness and safety of TXA use in all-comers with UGIBs. HALT-IT is a large multi-center study in progress looking to assess the impact of TXA on UGIB morbidity and mortality [15]. For LGIB there is no evidence for benefit or harm.

Balloon tamponade is generally only indicated in the crashing, GI bleed patient in whom endoscopy is not immediately available. Familiarize yourself with the procedure and where the gear is kept in your ED.

Fist10EM runs through the procedure here

In Part 2 of our series on GI bleed we discuss the evidence for PPI, prokinetic agents, somatostatin analogues such as octreotide, risk assessment, disposition and more.

Drs. Helman, Rezaie and Swaminathan have no conflicts of interest to declare

Justin Morgenstern on the first 10 minutes